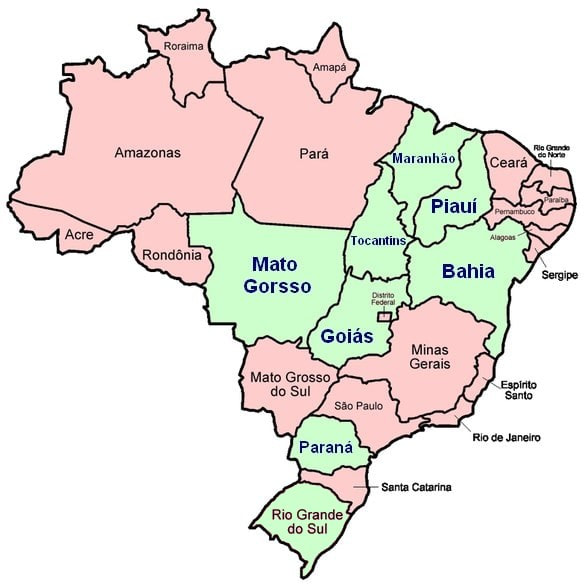 
The stable climate, with rainfall, balanced soil and flat topography, typical of cerrado, are the reasons the manager of Survey and Monitoring Crop at Conab, Carlos Bestetti points to favorable performance of the region. He said the boom happened in the last ten years by the influence of producers from the southern area of the country, who utilized the use of modern agricultural practices, in search of the most extensive and inexpensive locations to produce on a large scale.

"The prospects of the region point to increased production in the coming years due to the large area of woodland that, without breaking the environmental law, allows progress to new productive centers," says the coordinator. Farmers can increase production without deforestation in fragile areas, using modern technology. In the 2009/2010 harvest, the region produced about 12.2 million tons of grain. The forecast for this season is an increase of 17%. In the area planted, an increase of 10% over the previous crop. "Taking into consideration the escalation of production and the opening of new areas, the trend is the increased participation of these states on domestic production, which today is 15 million tons."

Until recently, the states of Maranhão, Piauí and Bahia, had practiced subsistence agriculture, on small farms without the use of technology. The cultivation of land was characterized by cultural practices and basic sequential: cut and burn, plow and sowing.  Chemical fertilizers were seldom used. "This is a virtually extractive exploitation. When the land becomes exhausted, it is abandoned and a new area is cut, burned and sowed, "explains Bestetti.

The arrival of Southern producers, practitioners of corporate agriculture, encouraged the opening of large areas available for planting with the use of technology. It was precisely those producers who brought the states of Maranhão, Piauí and Bahia into the national production cycle.

The state of Tocantins had different characteristics in its colonization. Apart from subsistence farming, initially, it had innovative programs such as Project Rio Formoso. Established over 30 years with support from the federal government. The project encourages the production of rice. In the 1980s, many farmers were attracted to the region due to the financial support offered by the program. With the availability of land, water, technology and financial resources, farmers have migrated to the state. The production took a big leap and new investors were attracted by the success of the first arrivals.

Matopiba agribusiness was also favored by the opening of the Tucuruí locks on the Tocantins River in November 2010. "The region has deficient infrastructure for the marketing of grain, mostly soy, and the Tocantins River waterway has emerged as a solution," says the coordinator of Rural Infrastructure Services, Logistics and Aviation Agriculture Ministry of Agriculture, Carlos Alberto Nunes.

The potential for water transportation in the area could reach 18 million tons, with other current alternatives, such as construction of the North-South, the sluice Lageado (Tocantins) and project execution of the sluice of the Strait, on the border of Tocantins and Maranhão. "All this, allied to the adequacy and expansion of Port of Vila do Conde and Hill (Belém-PA) and Itaqui (Sao Luis, Brazil), natural ways to export goods from the region, will facilitate further development of the region."

For an unevenness that reaches 75 meters, Tucurui has two locks separated by an intermediate channel, 6 km. The federal government's  The locks were designed for the handling of cargo vessels with large volumes, such as agricultural bulk. "It is the first step to improve the navigability of the river, creating the option of this new mode of transport to reduce logistics costs in disposing of the increasing production of the region," says the coordinator.

Since last January, the locks have been in the testing phase and are expected to start operations in March. However, grain producers should expect the adequacy of the ports of Vila do Conde and Hill, Pará, to enjoy a reduction of up to 15% in freight cost. The expectation is that this is already possible in the season 2011/2012.

In the future, with the completion of the locks of Lageado Strait and the navigable course of the Tocantins River will be expanded to 1500 km. "The works will enable the increase of grain production (soybeans and maize) in several counties, through the conversion of grazing areas without further deforestation, which will represent a big step for the Brazilian agribusiness," notes the coordinator.

source: Portal do Agronegócia
Kory has traveled these States while conducting Ag Investment Tours and established professional contacts in all of them.

(Also in Argentina)
​
Back To Top