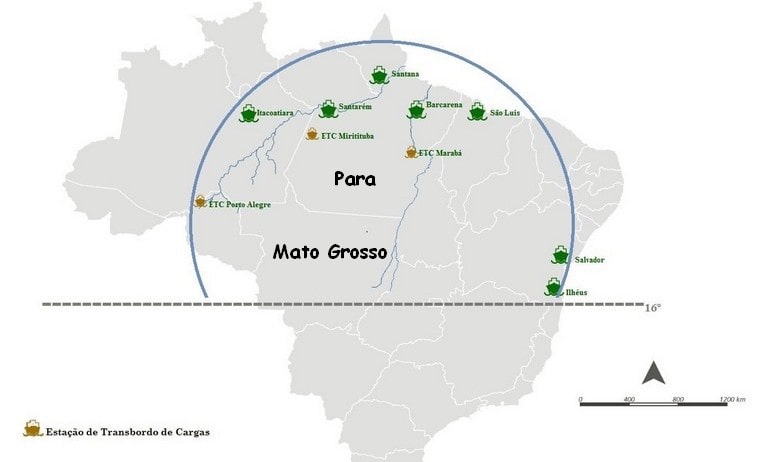 ​The map above, shows the principle ports (many under development) for exporting grain and importing inputs from/to Mato Grosso, Tocantins and Goiás mostly via rivers. Presently, most grain is exported to the South via highways.
​
​
UPDATE:
21 June 19

From July Newsletter II:
(example of the type of information available to subscribers)

Tokarski  (Director, ANTAQ, National Agency for Waterway Transportation) also highlighted the potential of Arco Norte, noting that in Porto Velho, on the Madeira River, port handling was approximately ten million tons last year, with 7.4 million tons of grain. The director of the Agency also brought numbers of the port movement in Itacoatiara (AM), where 10.3 million tons were handled, and about seven million tons were grain.

USDA:  Brazil 2015  The Soybean Transportation Guide is a visual snapshot of Brazilian soybean transportation in 2015. It provides data on the cost of shipping soybeans via highways and ocean to Shanghai, China, and Hamburg, Germany. It provides information about soybean production, exports, railways, ports, and infrastructural developments.  pdf file
23 Jan 18

Arco Norte:  At least 43% of the grain exports produced in Mato Grosso do Sul in 2017 went through the so-called Arco Norte. The port of Barcarena (PA) was the highlight, with an increase of 92.6%.

With the closing of the November and December numbers of the Statistical Yearbook of the National Waterway Transportation Agency (Antaq), the Port of Itaqui indicates that this year will have a much larger movement than in 2016, when it closed the 12 months with a 17,082 million tonnes.

From January to October, figures indicate that shipments and landings totaled 16.321 million tons, or 760 thousand tons less than that of the previous year. The volume of shipments, in the ten months, total 10,011 million tons, while landings, 6,310 million.

Despite the recovery, the movement is expected to be well below 2015, when the port handled more than 21.816 million tons and should narrow or slightly exceed the handling of 2014, which was 18.082 million tons.
​
According to Antaq figures, in the month of October, Itaqui passed through 1,822 million tons of cargo, more than the one registered in September, 1,070 million tons.

For its performance in the ten months of this year, Itaqui is occupying the 11th position in the ranking of national ports, but it is the sixth among the public ports, behind Santos (SP), Itaguaí (RJ), Paranaguá (PR), Rio Grande RS) and Suape (PE).

Excerpts from article from Portos & Navios

The Midwest Region (Goias, Mato Grosso, and Mato Grosso do Sul) accounts for 42% of domestic production of grain, but only 18.5% of the crop is shipped via the Northern Arc ports, although these ports are closer to the producing regions north of Cuiabá (MT) and capital markets such as Europe, North American and the Panama Canal route. 'A significant portion of soy travels to the South by truck and back to the North by ship, which does not make sense,' says Miranda.

CNA's survey shows that the average cost of transporting the grain harvest to the ports in Brazil is US $92 per ton, while in the US it is $23 and Argentina, $20. However, Mato Grosso producers paid US $126 per tonne to ship their products to the ports of Santos and Paranagua, but would only spend US $80 per ton, if it had the right conditions to export through the ports of Pará. Mato Grosso producers lose US $1.2 billion a year because of the logistics.
16 Feb 17

Getting there: The rush to turn the Amazon into a soy transport corridor
​continue to article