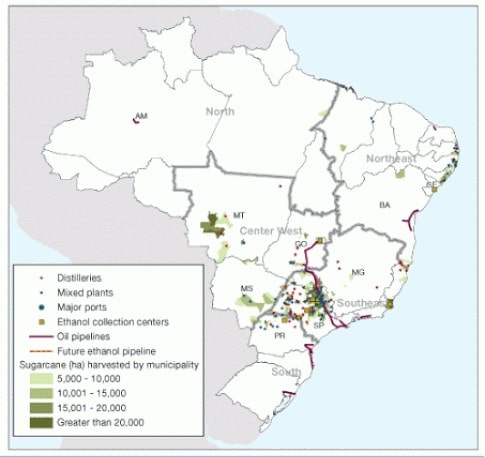 Example of Ag News that Newsletter subscribers receive on a daily basis. ​
Mato Grosso could generate about 10,000 jobs with the installation of two new biofuel plants in 2020, according to a study by Agroicone, a consultancy specializing in global issues of Brazilian and global agro.
The two plants are being implemented in Sorriso and Campo Novo do Parecis and should start operating next year.

One of the plants in Sorriso can produce about 500 million liters of biofuel per year, and has the capacity to generate 8,500 jobs directly and indirectly in the state. The other, in Campo Novo do Parecis, should generate 2,500 job openings.

The report shows that the state is the largest national producer of corn ethanol in the country. In the 2018/2019 harvest, 590.9 million liters of biofuel were produced, which corresponds to over 70% of national production.
​
The National Corn Ethanol Union (UNEM) predicts that at least three more plants should be built in 2021, one in Nova Marilândia and two in Nova Mutum, 261 km and 269 km from Cuiabá, respectively.
According to the data, a plant that produces about 500 million liters of biofuel per year, in its initial phase, has the capacity to generate 8,500 jobs directly and indirectly.

Initially, it can move about R $ 1.5 billion annually in the domestic economy, including the value of production, which is estimated at R $ 660 million, collecting R $ 80 million in taxes.

However, when the plant is operating at 100%, it can inject into the economy around R $ 2.5 billion and Gross Domestic Product (GDP) the amount can reach R $ 910 million, and should raise around R $ 73 million.
According to Unem, the state has six corn ethanol plants in operation. Three of them only manufacture biofuel and the other three produce biofuel in the off-season of other grains.

In addition to the Mato Grosso plants, Brazil has five other corn-based biofuel production plants. There are three in Goiás, one in São Paulo and one in Paraná.

Unem expects high growth in the coming years. The entity expects that investments in logistics, such as BR-163 and railroads, especially with a view to the North Axis, will materialize and there will be consolidation aiming at the flow of production to the North and Northeast, as well as a new export channel.
​
In this crop should be produced 31.241 million tons of corn in Mato Grosso. Last season, 31.3 million were harvested.
​