The TransAmericana Railroad that will connect the port of Ilo, Peru, to the Port of Santos (SP), will enter Brazil through Corumbá, followed by Campo Grande, Ponta Porã and Três Lagoas. For the state, the modal should represent a shortening of 20 thousand kilometers of distance in the maritime route of transactions with the Asian market.

This week, the signing of the protocol of technical cooperation with the German Government took place in Brasília, which will detail the parameters and standards of the equipment to be used in the railway. The joint declaration of intent will ensure the transfer of German technology in the recovery of the railway network, which has 1,700 kilometers in the stretch of the West Loop, now managed by Rumo.

The proposal with the implementation of TransAmericana Railroad is to integrate the economies of Brazil and Bolivia through Mato Grosso do Sul. It is a consortium of private companies formed by RUMO - Malha Oeste, Ferroviária Oriental (Bolivia), Andina Railway (Bolivia ), Transfesa, MP Trade (China / Brazil) and the company Intermodal Hub Três Lagoas.

The project was born from a consortium formed by companies that depend on the modal and are interested in operating it after the conclusion of the contract with Rumo / ALL, connecting the West Railroad to the Eastern Railway in Bolivia and its possible connection with the Andean Railway, linked to the ports of the Pacific Ocean, which is the fastest route to international cargo trade from South America, with only 18,651 kilometers separating the port of Ilo in Peru from Asia. On the other hand, starting from the port of Santos in the south of Argentina, 22,616 kilometers are traveled and, via Central America, 25,918 kilometers.

The project was presented to the government of Mato Grosso do Sul in December last year by the project coordinator of the railway. And this week, the cooperation document was signed. The commitment was signed by Brazil through the Ministry of Transport with Germany, represented by Ambassador Georg Witschel.

'This cooperation of Brazil with the German government, which will foresee the participation of federated entities, municipalities and states, in various areas of the infrastructure sector, will change experience and technology, discuss projects of interest mutual. This is the first step and for the first time we have ratified a document of this magnitude, which will greatly strengthen our relations, and the tendency will be to bear fruit in this important area for Brazil, 'said Transport Minister Maurício Quintela. 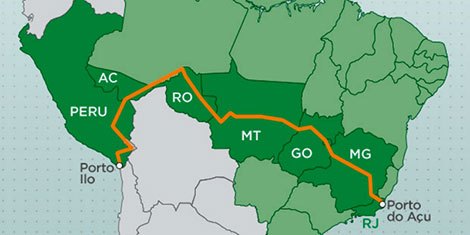